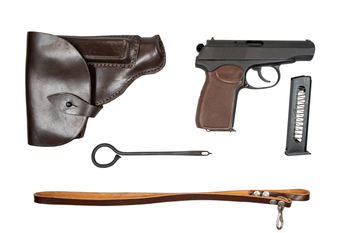 ONLY A FEW LEFT!

The Arsenal Bulgarian 9X18 caliber Makarov Pistol Model P-MO1 in black parkerized finish. We are pleased to be able to offer this small number of these pistols which have become scarce over the years. Shooters and collectors know these are some of the finest small semi autos ever to come out of the Com-Bloc part of the world. The Makarov is a compact, sleek, double action design with a hammer-drop safety. Two 8 round magazine. Trigger guard style may vary. No Hand Select or Special Requests

Each gun comes with:

These are HIGHLY collectible, they are in extremely short supply and have been not seen on the market in quite some time.

The company's history can be traced back to 1878 with the first armory in the country - the Ruse Artillery Arsenal. Due to strategic concerns it was relocated in Sofia in 1891. After the nation's defeat in the Second Balkan War and World War I, in 1924 the company and all of its equipment were relocated in Kazanlak, a town situated in central Bulgaria. The armory was given the name Darzhavna voenna fabrika ("State Military Factory").

Initially producing only artillery gun components and ammunition, the factory later began to manufacture gas masks (1920s), nitroglycerin (1930s), machine tools (1940s) and finally assault rifles, optic sights and B-10 recoilless rifles(1950s). The first assault rifle, a direct copy of the Soviet AK-47, was produced in 1958. By the 1960s a total of seven factories were under the company's jurisdiction. Until the Fall of Communism in 1989-1990, the company was named Mashinostroitelen kombinat Fridrikh Engels ("Friedrich Engels Machinery Works") to conceal its activities as a military enterprise. As part of this strategy it adopted the manufacture of various civilian products, including automobiles such as the then-popular Bulgarrenault-8. In the late 1980s and early 1990s, Arsenal began cooperation with companies from Japan, Sweden, Ukraine and Germany.

MSRP: $39.99
Now: $27.92
Was: $39.99
This synthetic stock provides an excellent fit for a scope or straight sites. Made from weather resistant polymers it provides a perfect combination of aesthetics and functionality.br /br /Compatible...

MSRP: $40.45
Now: $27.32
Was:
Long-Lasting, Hard-Working Mag Cases That Look Truly Professional Hardened Inserts That Are Rigid On The Sides, Front And Bottom For Maximum Protection Separate Compartments For Each Magazine...

MSRP:
Now: $21.99
Was: $25.00
Mesko is a Polish ammunition manufacturer with over 90 years of experience producing ammo and rockets for the Polish armed forces. Now, they're serving the civilian market with Range Ammo made for...

MSRP:
Now: $289.99
Was: $330.00
9mm Turan 115 Grain Full Metal Jacket This ammunition is produced by Turan in Turkey, it is loaded into brass cases with sealed projectiles as well as primers for reliability in harsh weather...